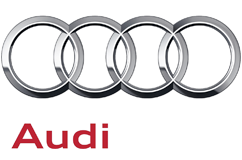 The Audi brand recorded growth in all regions in 2014, strengthening its leading position in both the Western European and the Chinese premium segments. With over 1.7 million vehicles delivered, the company set a new sales record despite the challenging environment in some markets.

The third generation of the iconic Audi TT was launched in 2014 and is available as both a coupé and a roadster. The Audi TT features sharpened design, reduced weight and an innovative control and display concept. The Audi brand also unveiled facelifts for the A6 and A7 models during the year. Audi has expanded its range of alternative drive systems with the A3 Sportback e-tron and the A3 Sportback g-tron. The Audi brand delivered 1.7 million vehicles in the reporting period (+10.5 %), setting a new sales record. Growth was particularly high in the USA (+15.1 %) and China (+17.7).

The Audi brand sold 1.4 million vehicles in the reporting period, up 7.0 % year-on-year. In addition, a further 513 thousand Audi vehicles were sold by the FAW-Volkswagen Chinese joint venture. There was particularly strong global demand for the A3 and A6 series, and the Q3 and Q5 SUVs. Automobili Lamborghini S.p.A. increased its unit sales to 2,521 vehicles, compared with 2,111 vehicles in the previous year. The new Huracán model was well received by customers.

The Audi brand recorded sales revenue growth of 7.8 % to €53.8 billion in the reporting period. This was mainly due to the positive unit sales growth. At €5.2 billion, operating profit was up 2.4 % compared with €5.0 billion in the previous year. The increased volumes and lower material costs had a positive impact, while upfront investments in new products and technologies, as well as in the expansion of the international production network, had an adverse effect. The brand’s operating return on sales amounted to 9.6 % (10.1 %). The financial key performance indicators for the Lamborghini and Ducati brands are included in the financial figures for the Audi brand.

Increase in deliveries in 2014