Letter to our Shareholders 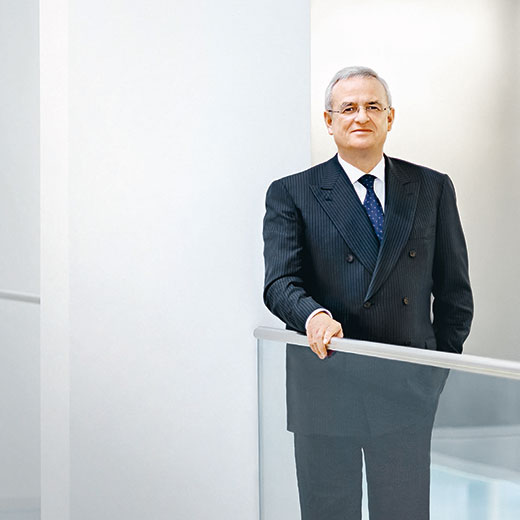 2014 was an unexpectedly difficult but ultimately good year for the Volkswagen Group. Political and economic uncertainty dominated the situation in many regions of the world, and this also had far-reaching consequences for the automotive industry. Despite these headwinds, we successfully kept your Company on a strong, stable trajectory.

As you can see, Volkswagen keeps its word and achieves its goals. We stand for strength, reliability and long-term success – even under less favorable conditions. Of course, this must also benefit you, as our shareholders, which is why the Board of Management and Supervisory Board will propose to the Annual General Meeting a significantly higher dividend of €4.80 per ordinary share and €4.86 per preferred share.

“We stand for strength, reliability and long-term success – even under less favorable conditions.”

The Volkswagen Group also grew qualitatively in many ways, above and beyond its financial key performance indicators. We not only won over but also thrilled customers with vehicles such as the new Audi TT, the Porsche Macan and the Volkswagen Passat, the ŠKODA Fabia and the growing SEAT Leon family. We now offer the widest range of electric vehicles and plug-in hybrids on the basis of our toolkits – which we are rolling out around the world. In addition, we have paved the way to rapidly expand our position in commercial vehicles with the full integration of Scania. Things are also moving forward in key markets: we strengthened our presence in China by extending our cooperation with FAW by 25 years and opening a new plant in Tianjin. In North America, we laid the groundwork for the future with the production start of the Golf 7 and the future Audi plant in Mexico, as well as plans for new SUV models in the region.

These are examples of what I think was an impressive year, and one that would not have been possible without the excellent team effort of our more than 590,000 employees. On behalf of the Board of Management, I would like to thank our entire team for their dedication and hard work over the past 12 months.

Our goal is and will continue to be qualitative and sustainable growth. We aim to pursue this path actively and assertively with our Strategy 2018. We know that the challenges we face are not going to get any smaller. On the contrary, the competitive pressure is unrelenting. The situation in markets like Brazil, India and Russia will remain difficult for the foreseeable future. In addition, the automotive industry is currently experiencing fundamental change. Look no further than the increasingly stringent CO2 legislation or the rapid digitization of vehicles, plants and showrooms. This costs us a great deal of energy and money, too. But at Volkswagen, we do not see this transition as a threat, but rather as a tremendous opportunity – one that we must and will take advantage of. We have already laid a solid foundation with “Future Tracks”, our Group-wide forward-looking efficiency program, which looks beyond 2018.

As you can see, Volkswagen is making itself future-proof in every area. Our Company continues to offer outstanding prospects because we stand for innovation, competitiveness and financial strength. This is another reason why I am convinced that your confidence in and support for the Volkswagen Group and its team will pay off. In every respect.