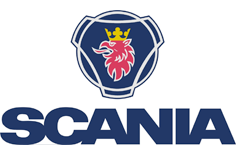 The Swedish commercial vehicle manufacturer unveiled several new variants of its comprehensive range of Euro 6 engines at the IAA Commercial Vehicles 2014 show, offering significantly lower fuel consumption and hence lower ongoing costs and greater environmental compatibility. The comprehensive engine program also includes drivetrains that can be powered by various alternative fuels such as biodiesel or gas. In addition, the brand unveiled its own hybrid system for buses. The Citywide runs on either diesel or biodiesel. The brand rounded off its appearance at the show by presenting new service offerings, such as driver training. It continues to focus on providing complete packages tailored to meet its customers’ transport business requirements.

The key figures presented in this chapter comprise Scania’s Trucks and Buses, Industrial and Marine Engines, and Financial Services businesses.

In Europe, pull-forward effects related to the introduction of the Euro 6 emission standard on January 1, 2014 had a negative effect on the business; a downward trend was also experienced in the South American commercial vehicle market. The political crisis in Russia also had a negative impact.

Despite this, orders received by Scania rose by 2.5% to 83 thousand vehicles. The brand’s performance was boosted by its broad expertise in Euro 6 engines, its many years of experience with consumption-optimized vehicles and its wide range of alternative drive systems. In 2014, Scania delivered 80 thousand (80 thousand) vehicles to customers worldwide, on a level with the previous year. The brand recorded growth in the Asian markets (+26.9%) and sales doubled in the Middle East. By contrast, sales dropped sharply especially in South America, due to market-related factors. Bus delivery volumes declined by 1.3% to 7 thousand units. Demand for services and replacement parts, on the other hand, increased significantly. The growth recorded by Scania’s financial services was also encouraging.

At 82 thousand (83 thousand) vehicles, the Scania brand’s production in fiscal year 2014 was on a level with the previous year (−0.8%). This figure included 7 thousand buses.

At €10.4 billion, the Scania brand’s sales revenue in 2014 remained at the prior-year level. Operating profit amounted to €955 million (€974 million). The increased demand for services had a positive effect, while the slight year-on-year decline in volumes had a negative impact. The brand’s operating return on sales was 9.2% in the reporting period, compared with 9.4% in the previous year.